Is there such thing as an Austen purist?  If so, I think I might be one.

I get a lot of “Jane-Fiction” sent to me to review.  It seems the shelves of romantic fiction are packed with takes and spin offs on Jane Austen’s books and characters.  And generally, they aren’t for me.  Just like I am not a fan of revival movies (ala movies remade from 70s tv shows), I generally find Jane Fiction to be lacking in creativity and maddening in how they have the hubris to rewrite a classic.

I say this all as a prelude to what follows next.

Among Jane-Fiction, Wendi Sotis’ Promises definitely comes from a unique and creative place.  She reimagines the first meeting of Elizabeth Bennett and Fitzwilliam Darcy as occuring when they are children, in a bookshop.  After a lengthy debate, the two form a fast friendship.

There are some charming scenes with the lovable, if not a little pitiful, Mr. Bennett that tell us why he always loved Lizzie best.

There is bulky dialogue, which lets the characters speak for themselves, but the speech is a bit anachronistic which I know drives some readers nuts.  We follow the characters as they grow into their own, learning about themselves as we learn more in depth about their lives than P & P ever thought to explore. 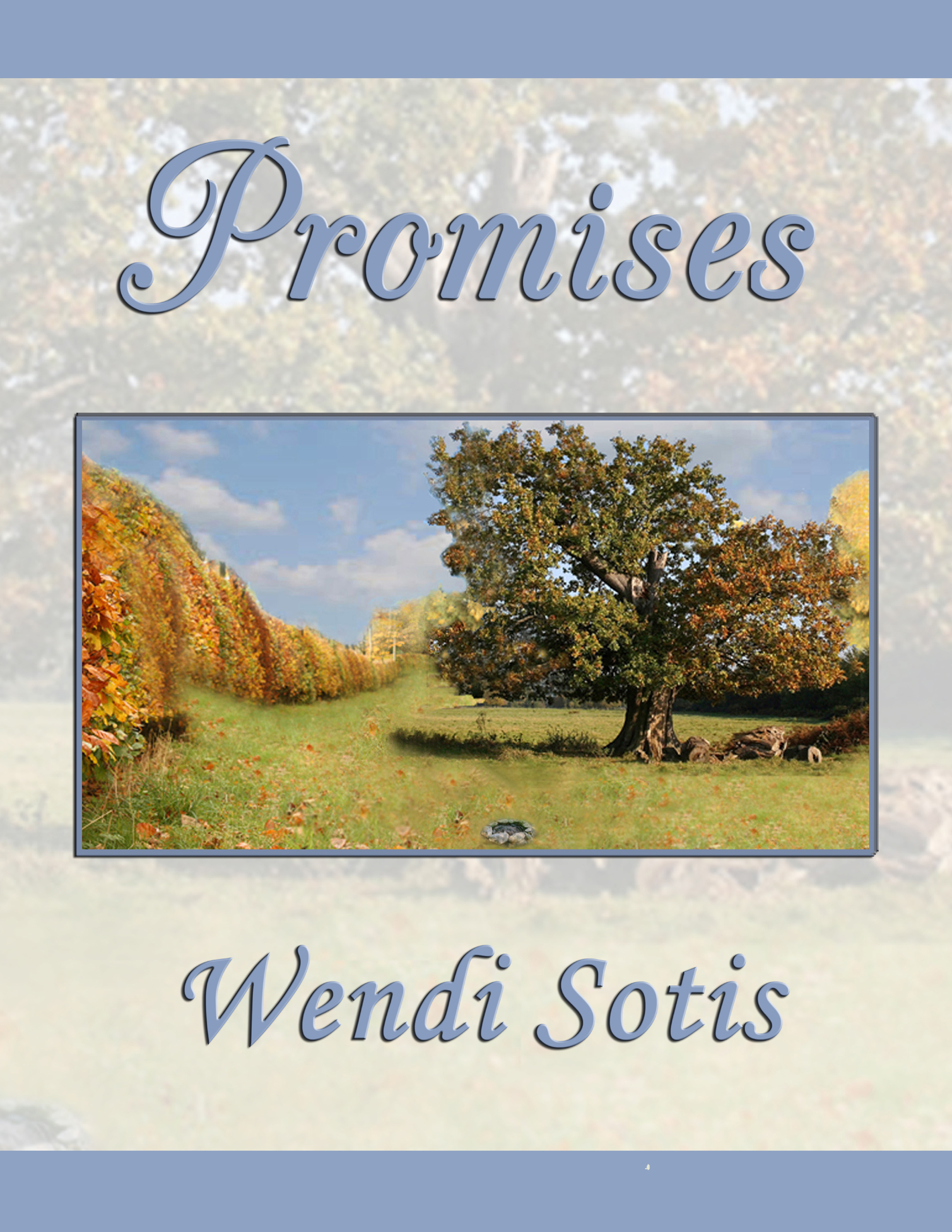 The book develops the romance over time between Elizabeth and Darcy, at which the basis is a long and unlikely friendship.  I love books that have friendship as the basis of romance…and the foundation here does not disappoint.

If, in my mind, I simply read the book and replaced the names so that it wasn’t messing with my beloved hero and heroine, I thought the book was well written, sweet and a promising start.

If read as an alternative story to Lizzie and Darcy, I chafed at the bit.

Sticking to the tradition and spirit of the Regency, Sotis’ book doesn’t get gory or glamorous, instead she develops real character studies of two unlikely lovers separated by family and fortune.

Although I believe her next book promises to be another Jane rewrite, I think a divergence where she stands on her own legs would be more interesting…and be the type of book I would be more likely to read.  However, fans of Jane-Fiction will find Sotis’ efforts all that is amiable and accomplished.

Another Jane-Fiction sent for my humble review was The Unexpected Miss Bennett by Patrice Sarath.  From the beginning paragraph, “It is a comforting belief among much of society, that a plain girl with a small fortune must have no more interest in matrimony than matrimony has in her” The Unexpected Miss Bennett spanks of Jane.  I say spanks (rather than smacks) in a fond way, in that I think it is thoughtful tribute rather than a mimicry.

The Unexpected Miss Bennett moves quickly, through the eyes of her sisters to thrust our heroine into the fray.  From the first sentence we know she is plain and unmarriable.  But evidently, her elder sisters have other ideas.

More polished, and although maybe less original than Promises, I found The Unexpected Miss Bennett a more enjoyable read that I will probably even give a second try (and perhaps a more in depth review).  First of all, because its centers around Mary Bennett, who truth be told I always pitied.  And The Unexpected Miss Bennett assures the delicate reader that in fact, we had no need to worry about Mary.  Mary quite gets her own in the end.  Embarking on her own adventure, she interacts with some of our faves and fave love to hate characters from P &P in a spin off that is less sequel than something else.

I also like the feminist/blue stocking bent of Sarath’s book which I think, in many ways, is in keeping with Austen’s own heart.

In this way, I found The Unexpected Miss Bennett to be a pleasant continuation of Austen’s work, with the author remaining true to the core and simply using a backstory we are all very familiar with (at least those of us hist-ro lovers) to create a beautiful story about an unlikely heroine.

Finally, I also was sent a copy of Sharon Lathan’s Miss Darcy Falls in Love for review.

If you didn’t catch the clue from the title, the story follows up on the character of Georgiana Darcy.

As part of a series following Elizabeth and Darcy, Miss Darcy Falls in Love also works as a single title.  It also does not have the more sensual elements of some of Lathan’s other titles, although fans of Lathan’s work may find that a bit tedious about the book.

Fans of  P & P will be pleased that Lathan sticks to Georgiana’s passion for pianoforte, and gives her a real musical bent that frames the story.  She also balances description, action and dialogue, and if misunderstandings and poor communication are fundamental to the plot…well then, it was afterall central to P & P.

Jane Fiction fans in search of something new will enjoy the read.

Recommended for Promises and The Unexpected Miss Bennett because the level of writing may exceed younger teens.  However, clean and light subject matter appropriate for most ages.  Miss Darcy Falls In Love has some references to sex and light intimacy worth a parental skim for teens under 17.

(3 out of 5 thoughtful and well written interpretation, just not my cup of tea)

(4 out of 5 well written interpretation after my own heart.)

While I did receive complimentary review e-copies of books, I was in no other way compensated for reviews.  As perhaps evident, I endeavor to give honest and careful reviews.