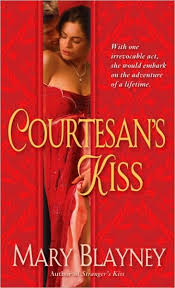 Fourth in a series, Courtesan’s Kiss was released in June of 2010.  As my inaugural Blayney read, I wasn’t expecting much but a light diversion from a heavy stint of academic reading.

Pleasantly surprised by the twists and turns of narrative, and deviations from the traditional formula of hist-ro, Courtesan’s Kiss was a slow burner that caught fire in the middle until I couldn’t put it down.

A spitfire heroine bent on shunning polite society by setting up her own salon after a broken engagement, Mia is an Italian heiress waiting for her majority.  Our stoic and monosyllabic hero is the brother of a Duke who longs to cast off a feeling of failure through the development of a cotton mill.  He has no time to play escort to Mia, who in turn has no interest in him.

There is some light fragrance of modern sensibilities in her pages, and a modicum of just plain silliness, but enough diversity in plot and characters that I was highly entertained.  A new author is always dangerous territory, but I found interest peaked by Blayney’s skillful writing and investment in the genre.

Mature content makes it very modern, but without the sex scenes it almost would fit in with some of Heyer’s more hysterically funny plots.

Overall, I recommend it.

“In Courtesan’s Kiss an independent woman is determined to make her way in the world—even if it’s a scandalous one. But first she must escape a nobleman with plans of his own.

After Mia Castellano’s fiancé breaks their engagement, the ton shuns her. Hardly scandalized, Mia sees her chance to finally free herself from society’s restraints — by becoming a courtesan. After all, a courtesan is in full control of her destiny: she manages her money, has her own house, and can choose her lovers. There’s only one obstacle standing in her way — Lord David Pennistan.

Lord Pennistan has been assigned the challenging task of seeing Mia safely to her new home in Derbyshire where her guardian awaits. The woman attracts nothing but trouble from the outset of their journey. Although with every adventure they share, David’s desire for Mia grows. And when they’re caught in a compromising situation, David insists she marry him. But there’s only one thing Mia wants from David and it isn’t his charity or his title. Can he convince her before it’s too late that the love she wants is already hers — to take or to lose forever?”